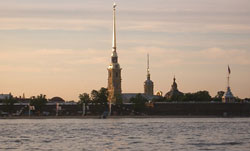 With a population of around five million, Saint Petersburg (Санкт-Петербург) is Russia’s second largest city and, in many ways, its cultural capital. Graced by a wealth of stately Baroque, Neoclassical and Art Nouveau palaces and mansions, Petersburg is one of the most beautiful cities in the world.

Founded in 1703 by Peter the Great (Пётр Первый), the city was named after the tsar’s patron saint—Saint Peter. The tsar himself laid out the plan of his dream city. Situated in the delta of the Neva River (Нева) on more than one hundred islands, the new capital of Russia became known as the “Venice of the North” (Северная Венеция).

In 1914, with the outbreak of the First World War, the German-sounding name of Saint Petersburg was changed to the more Russian-sounding Petrograd. In 1924, after Lenin’s death, it was changed again, to Leningrad. In spite of these changes, people continued to call it by the familiar name of “Peter” (Питер). A referendum of the city’s population in June 1991 produced a narrow majority in favor of changing its name back to Saint Petersburg.

There are over fifty museums in Saint Petersburg, the most celebrated of which are the Hermitage (Эрмитаж) and the Russian Museum (Русский музей).

Saint Petersburg State University (Санкт-Петербургский государственный университет) has 22,000 students and 1700 faculty members. Across the Neva from Decembrists Square (Площадь декабристов), with its Bronze Horseman (Медный всадник) statue, erected by Catherine the Great in honor of Peter the Great, the university’s central campus is located in the heart of the city, on the beautiful University Embankment (Университетская набережная). The university’s main buildings—the Twelve Colleges (Двенадцать коллегий)—were built by the architect Domenico Trezzini to house various government departments. Later they were turned over to the university. Along with Moscow State University, St. Petersburg University is the oldest and the most prestegious institute of higher learning in Russia.

July and August are the warmest and sunniest months of the year, nevertheless rainfall is common. The average July temperature is around 60°F (16°C), but really hot weather—with temperatures up to 100°F (38°C) and higher —may occur from late May to early September.

A feature of St. Petersburg which strikes visitors from less northerly climes is its “white nights” (белые ночи), which reach their peak around the summer solstice in late June. During this period there are only a few hours of twilight, with daylight for the rest of the day.

For tips on dressing for this weather, see “ What to Bring with You.” 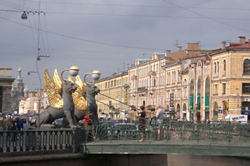 In addition to the Russian language, during the Yale Summer Session in Saint Petersburg you will be studying Russian cultural history. The culture segment of the program—RUSS S-242: The Space of the City —is an interdisciplinary exploration of Russian cultural history through its art, architecture, theater, music, and film. Topics include conceptions of Russian nationhood; myths of St. Petersburg and Moscow; dissent and persecution; elites, intelligentsia, and attitudes toward the common people; conflicting appeals of rationality, spirituality, and idealism; the politicizing of personal life; and effects of Russian artistic innovations worldwide.

In New Haven, we will give you the historical framework for understanding developments in Russian artistic life during the modern period (18 th–20th centuries) with the help of selected readings and visual aids such as slides and film.

In Petersburg, we will use this magnificent and enigmatic city as a cultural workshop, exploring various aspects of Russian life in the streets, parks, museums, and other significant urban institutions. Some of the lectures during the second month of the program will take the form of field trips, devised to illustrate “on the ground” a particular discipline such as literature, architecture, music, painting, drama, and film.

Weekend excursions to Moscow and Peterhof as well as the bus tour of the city, a boat tour of its rivers and canals, and the walk through Dostoevsky’s Petersburg, will complement the lectures and other field trips.

You are going to visit one of the most beautiful cities in the world, variously described as Paris of the East and Venice of the North, a city rich in cultural and historical monuments. Our program of excursions is designed to supplement your studies in the Russian Culture course, which focuses on the modern (or “Petersburg”) period of Russian history. Besides the required excursions, you will have an opportunity to go on alternative outings, led by program faculty and staff, to the Conservatory, the Akhmatova Museum, the Mariinsky Theater, the Alexandrine Theater, the Maly Drama Theater, the “artists’ village” in Ozerki, the Crosses Prison, and Pavlovsk.

Our sightseeing program begins with a bus tour of the city the day after you arrive. Later, you’ll go on guided tours of two of the world’s greatest museums—the Hermitage and the Russian Museum. We’ll also take you to Dostoevsky’s Petersburg: there you’ll be able to see the places connected with the writer’s life and with his novel Crime and Punishment (Преступление и наказание).

On subsequent weekends, we’ll take two trips. The first is a day trip to Peterhof (Петергоф), a suburb of Petersburg that served as a summer residence of Peter the Great and other Russian tsars. With its splendid gardens and elaborate fountains, Peterhof has been compared to Versailles.

Our second three-day trip takes us to Moscow, the ancient and modern capital of Russia with its incomparable Kremlin and Red Square.  You will visit its most important meuseums and galleries including St. Basil’s Cathedral, the House of the Boyars Romanov, the Novodevichiy Convent, Lenin’s Mausoleum, Tolstoy’s House-Museum, VDNKh, the Space Museum, and Moscow University on Sparrow Hill, from which you will take a boat trip down the Moskva-River back to the center of the city.  You will travel to and from Moscow by an overnight express train in a sleeper compartment with a restaurant.  We will end our stay in Moscow with a dinner party.